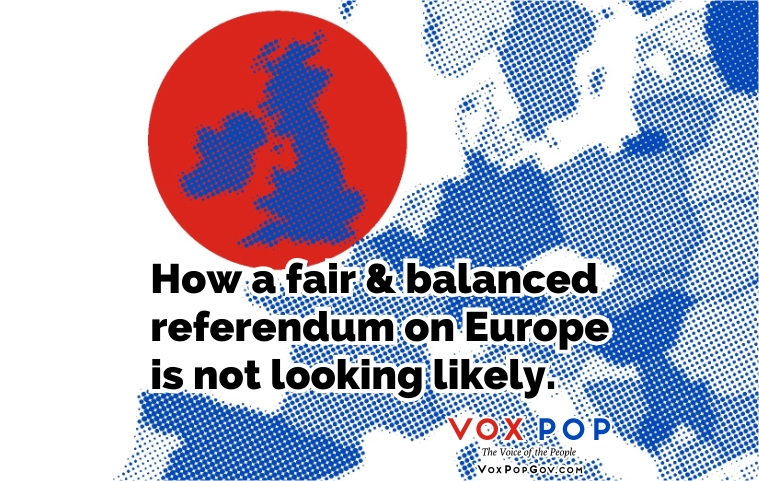 So the Prime Minister has decided to give us a referendum on Europe to placate his backbenchers and stop any further defections of Euro-sceptic Tories to UKIP.

Vox Pop is all in favour of referendums. In fact, Vox Pop would like to see all policies decided upon by the whole electorate, not just a handful of politicians. However, the manner in which the referendum on Europe is being handled goes against the fair way it should be managed.

When a question is put to the public, we should be presented with the facts and statistics in an easy-to-understand way without political and personal opinions. It’s wrong for the Prime Minister to give the public the choice then lobby to get us to vote his way and Downing Street rolling out a letter signed by business leaders that advocates remaining in the EU is not impartial.

Business leaders naturally want to remain in the European Union so that they can shuffle their profits out of the UK and lessen their tax “burden” as they regard it. The EU has given birth to many complicated tax arrangements that even have their own nicknames such as the “Double-Irish” or the “Dutch Sandwich” so it’s understandable that businesses have a vested interest in remaining in the EU and as such their biased opinions should not be heeded.

A recent episode of Channel 4’s Dispatches programme demonstrated how membership of the EU has allowed companies to import cheap labour from Eastern European member states on low apprenticeship wages, who they then fire before their apprenticeship period ends so the employee doesn’t qualify for full wages or employee protections. Every 11 weeks or so, a whole new batch of the workforce is dismissed and has to turn to the welfare state to help them.

By signing up to Downing Street’s letter, business leaders are attempting to influence their employees by threatening that their company would not be as profitable as it is now and by extension that their jobs would not be secure.

There will be many MPs who have an eye on a company directorship when they stand down from the House of Commons so will not want to be seen by potential employers as getting in the way of big business. 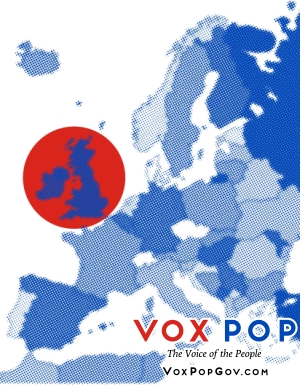 Whilst a lot has been made of clawing back Britain’s sovereignty when it comes to law-making, we should be presented with a list of all the laws that we’ve had to implement through EU directives so we can decide if membership has been of personal benefit to us as individuals and the country. Conservative Euro-sceptic MPs were no doubt apoplectic at the thought of having to implement civil partnership laws which may not have come about were it not for Britain’s membership of the EU and decisions passed by the European Court of Human Rights, and there may have been some who didn’t want to implement costly health and safety arrangements that would protect their employees but reduce the companies profits.

Whether remaining in the EU would be the right or wrong thing to do, it will be impossible for some of the public to decide on the facts judging the way that the lead-up to this referendum has already become a cat fight between opposing sides, all making unsubstantiated statements with hypothetical scaremongering.

To maintain a fair and free vote, it should be a criminal act for companies, media, organisations, individuals, and other entities to try to persuade, apply pressure, lobby, bribe, or threaten (which includes, but is not limited to, the loss of employment, financial penalty, or violence) or otherwise influence any member of the electorate to vote in a particular way.