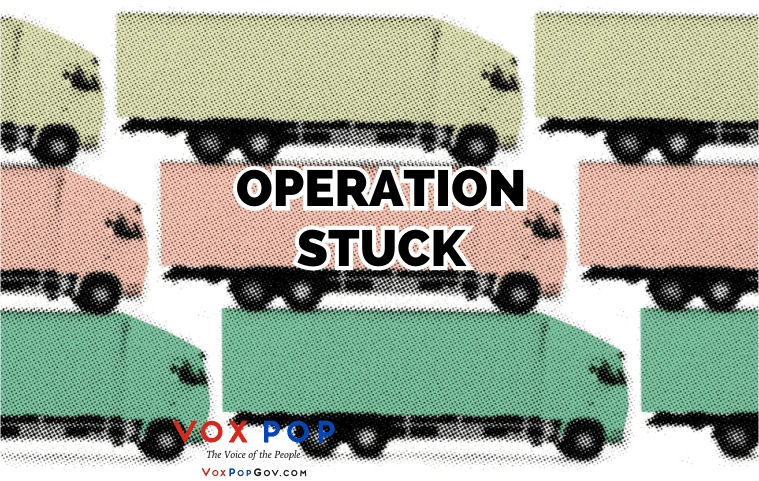 Vox Pop proposes to eradicate MPs and for us, the public, to make all policy-decisions ourselves. Strangely enough, one of the criticisms levelled at direct democracy is the same thing: a lack of politicians to make decisions on our behalf.

Critics seem to think that we need fast-thinking MPs to make swift decisions for us in times of crisis, but as “Operation Stack” has shown, MPs are consistently slow to react to events and mostly ineffectual. When, or if, they do react, they can often make the situation worse.

The Conservative government seem to be keeping their fingers crossed and hoping the queues of lorries on the M20 just go away naturally without any planning or intervention to alleviate the situation. Whilst the motorway becomes a car park, independent businesses are suffering huge financial losses that may see them not survive the Summer.

Labour’s response is to try and spark a fight with our European neighbours by demanding the French government pay compensation to impacted Kent businesses.

Either way, inaction or provocation is not what supporters of representative government generally have in mind, but it does demonstrate that we’d do just as well, if not a lot better and be a lot more democratic, without MPs.

If the Vox Pop system of government was in place, members of the public could have proposed solutions ages ago (such as, for one quick example, using the closed Manston Airport in Kent to queue HGVs and get the M20 open to cars again) which we could have voted on instantly to approve or decline.

Of course, if the public had been in charge to date, instead of “here-today, gone-tomorrow” politicians, we may well have not had the policies, or bottle-necked infrastructure, in place that lead to Operation Stuck in the first place.

To reach this aim, we need members to volunteer to stand as candidates at the next general election and, most importantly, we need donations to fund the workings of a new political party and to spread the word about our truly democratic model to as many people as possible.